In an effort to make sure our Lord and Master, Sir Rusty the Bunnyman, is the most comfortable and content that he could be, we brought two of his favorite blankets, a towel fresh out of the dryer so it was toasty warm, and HIS CARROT to him in the basement.  He had been laying facing out on the chair.  When we put the carrot down, he moved right over to it.  Bunnymen need their carrots!!

When I went to visit him this morning, this is the cuteness that awaited me. 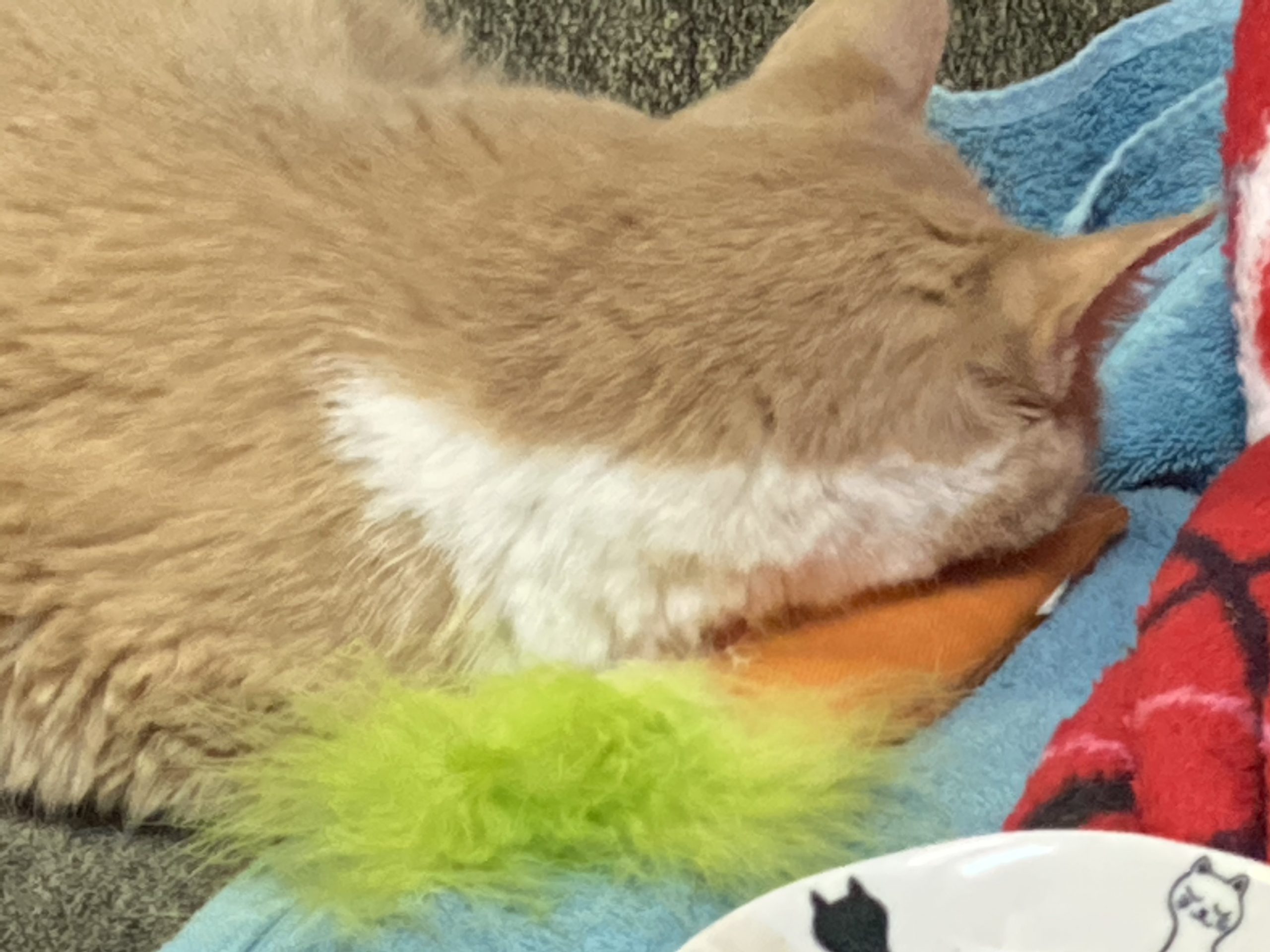 He also accepted some food!

I don’t expect miracles.  I already have received more than my share with him.

We just want him to be happy and not in pain.  Without food for 10 days, he has grown weak.  If he going to stick around, he needs to eat.  If he is going to move on, then we are as OK with that as we can be.

So seeing him eat made me cry… again…

Thank you for all of the prayers and positive energy that each of you have sent Bunnyman’s way.  I believe it is making a difference!

Until the next update…

Two weeks (as of Thursday) since this hell started again.  We didn’t know if we would see him ever again as we handed him over in the parking lot 13 days ago yet he is still here!!

We really don’t have any huge updates that haven’t been shared. Here is something new.

Rusty tried to open the basement door over the weekend. We have decided that we are letting live out the rest of his life on his terms (just like he has to this point) and opened the door for him.  He made his way down the stairs and to the back room. 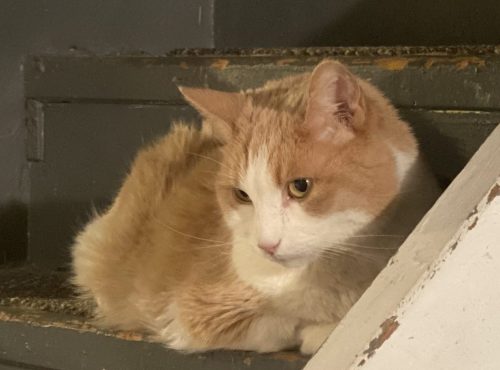 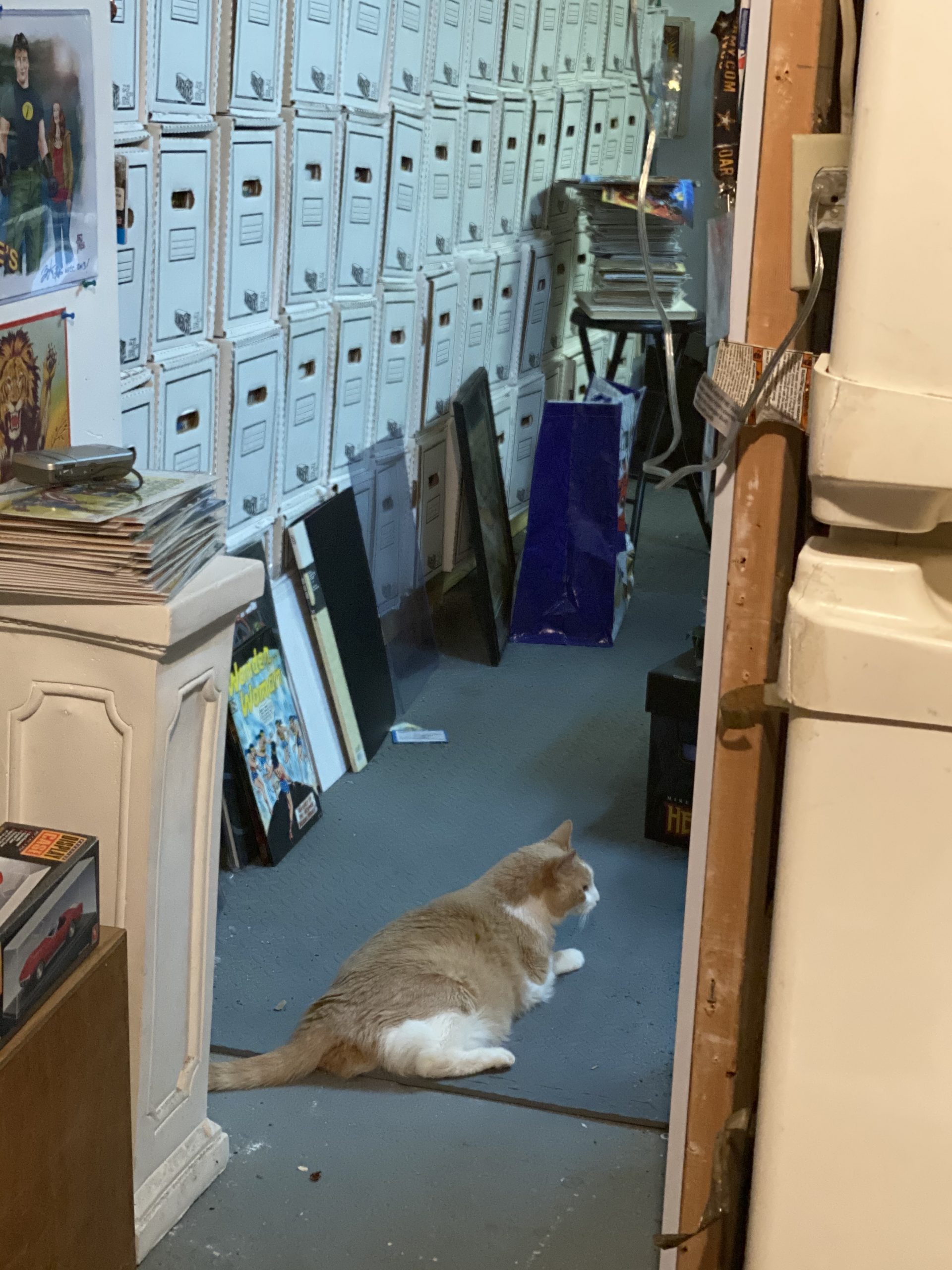 He has decided to hang in the basement in his Daddy’s comic book room (AKA Man Cave) surrounded by a kitty buffet of food and treats that he is not touching. We are on day 3 of the Mirataz appetite stimulant and he still isn’t eating. He did take a few tiny licks of warmed broth yesterday morning and some water.  He is mostly just sitting in Daddy’s recliner, sleeping, resting etc. 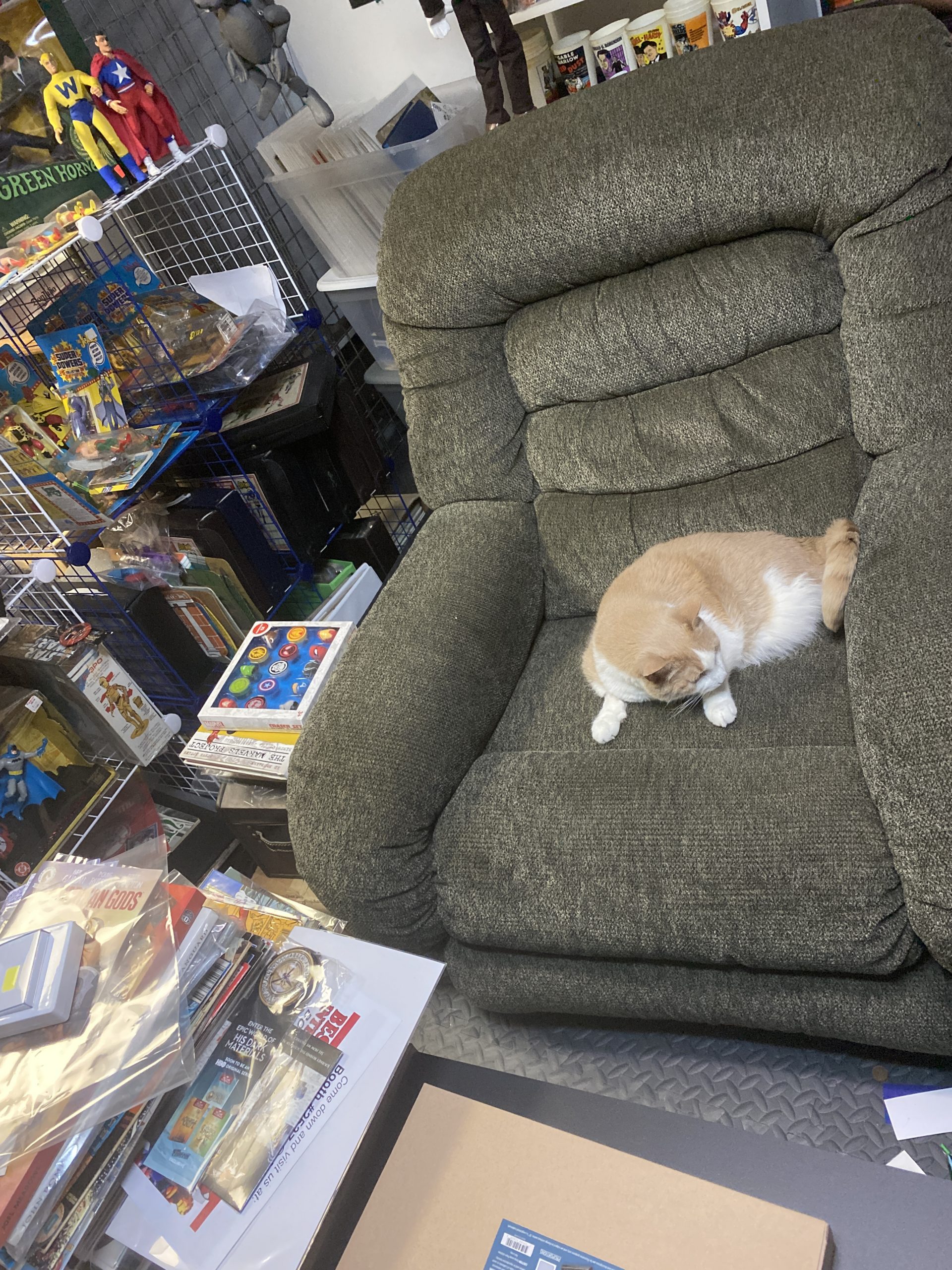 He is still receiving the transdermal lasix too.

We did have a water issue in part of the room when bad storms went through our area on Monday.  Rusty decided he had to be in the middle of everything as we tried to clean up the water. 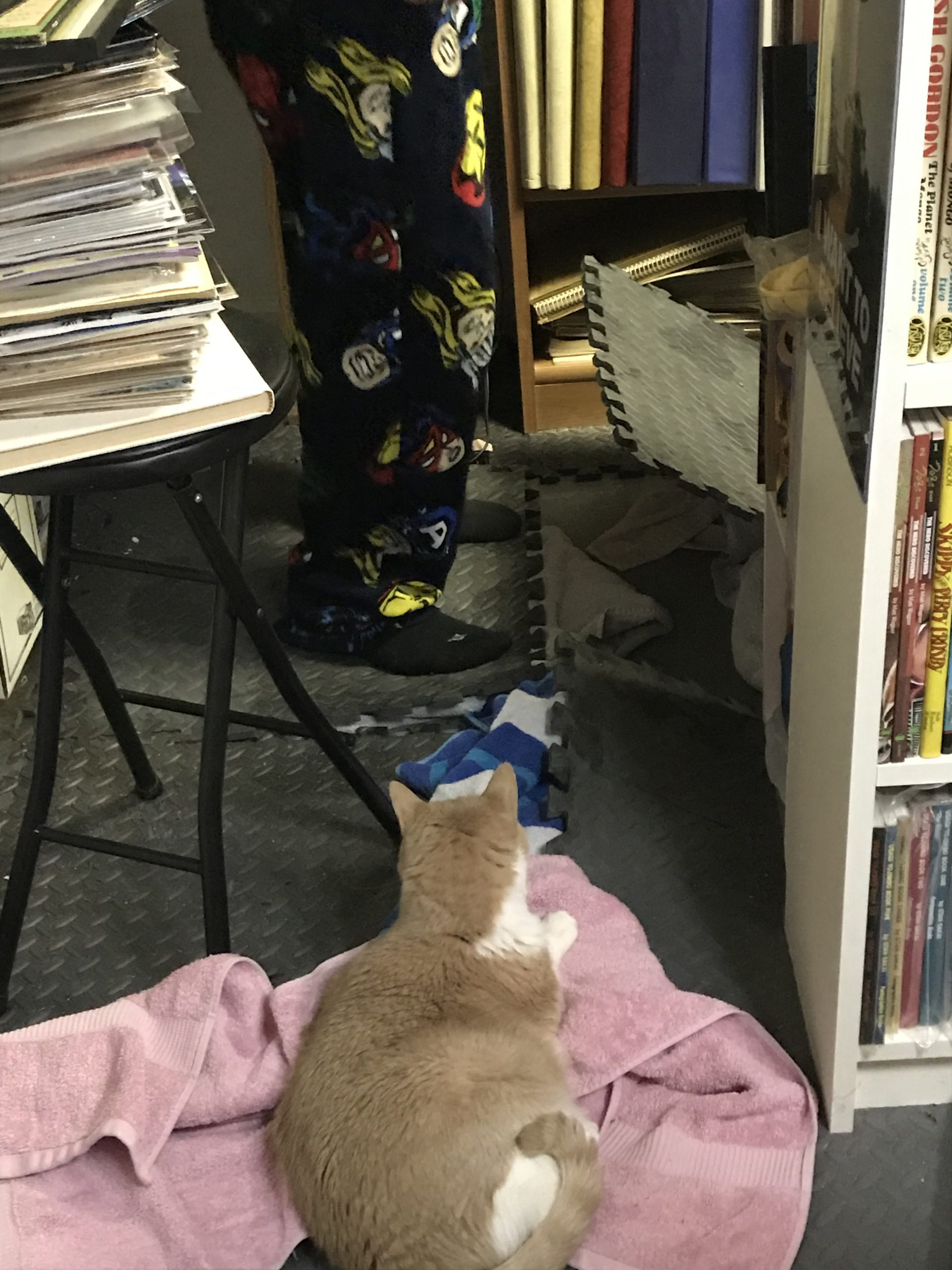 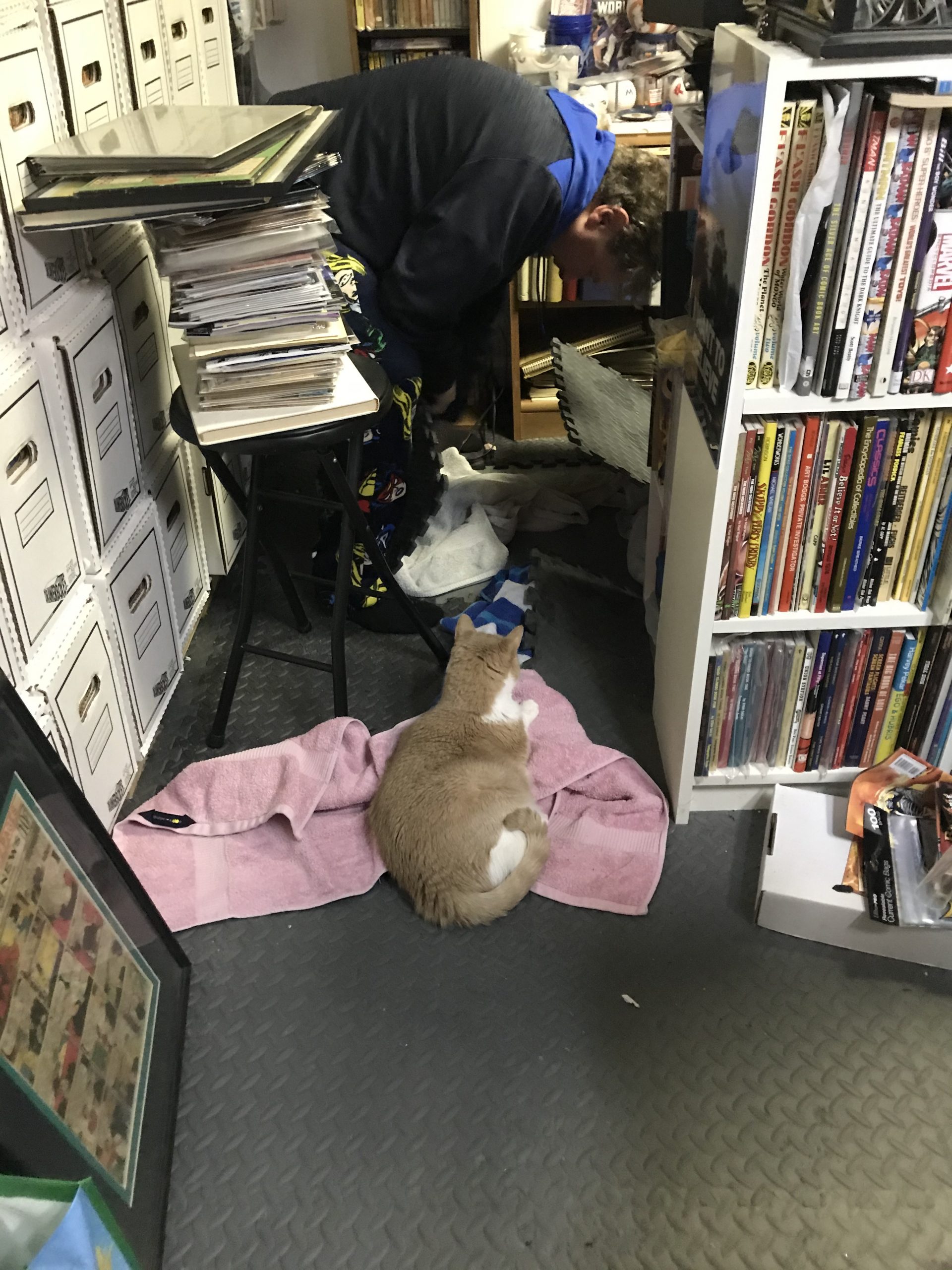 He has also started to scratch at the foam tiles again.  This may sound like a weird thing to bring up, but he uses this foam tiles as another cat would a cardboard scratching post/pad.  He hasn’t done this since he was home.

He let Mommy give him a belly rub too.

Hope all of your furbabies are doing well.  Until the next update…

So a week has gone by since our world was turned upside down again. The update…

Rusty the Bunnyman is still holding on. We have been back and forth via phone with the vet.  We thought we were going to have to take him in to help him along to rainbow bridge. The vet said increase the frequency of the Lasix. He hasn’t really eaten anything, so the vet had us pick up a transdermal cream for appetite stimulant. They are not ready to give up on him yet. 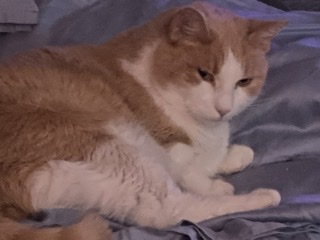 with that being said, he did tell us to make sure Rusty didn’t start panting and having labored breathing. Not to be too concerned about the belly breathing as long as the breathing rate is down.

They recommend we keep track of the good days versus bad days so they can help us if we need to make a final decision.

I am grateful we’ve had this extra week with him and don’t know how many more we will have. This is exhausting from the human standpoint. We don’t know what to feel what to prep for. We don’t know if this is just the new normal for a while. I know there is no right or wrong answer right now. Every time we talk about putting him down, he does something else that shows he’s not ready to leave.  A simple example… He wasn’t eating or drinking anything for over 24 hours. This was him five minutes ago.

I continue to pray that we can do the best thing for him.

wishing you all a very happy Easter. Hoping you are all staying healthy and your for babies are doing well.

How is our little boy doing?  I really don’t know.

Rusty is resting as I type. 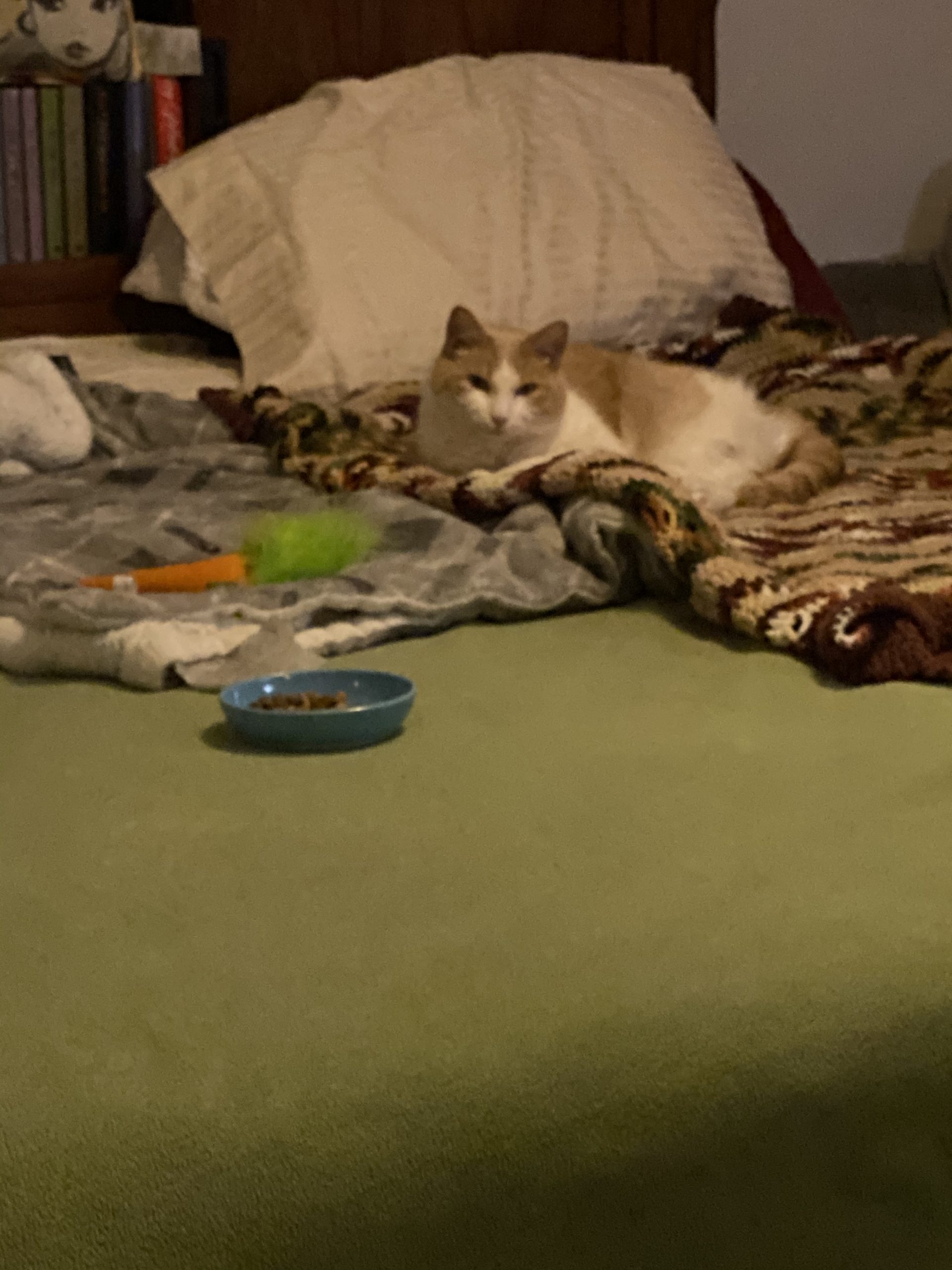 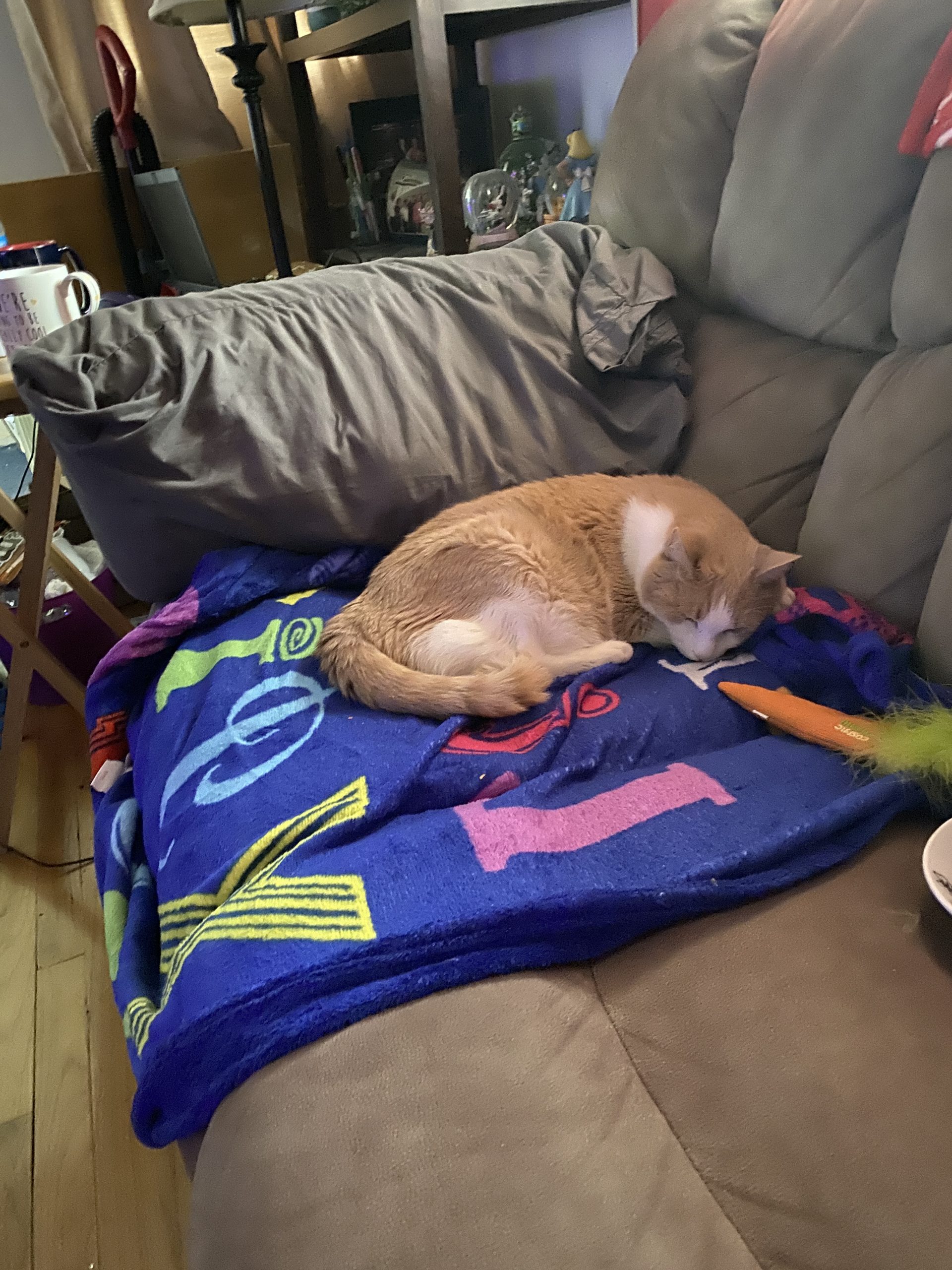 Still no purr and sort of a whine instead.

We cancelled the cardio appointment because he couldn’t handle the ride or the sedation.  He probably wouldn’t have come out of it.

So right now we are just watching. Not knowing what we will see. Is he really rallying to survive or is it the rally before the end? 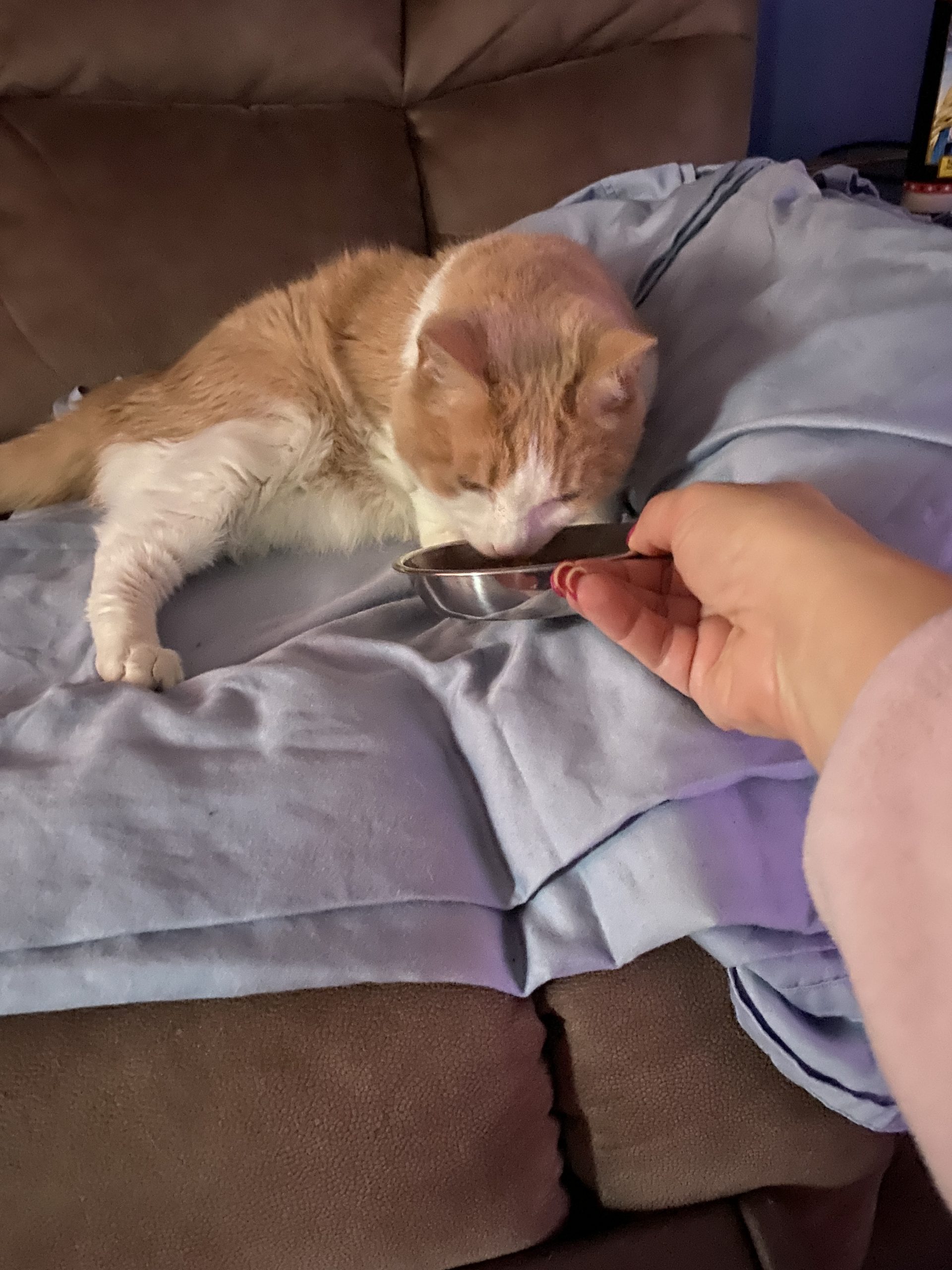 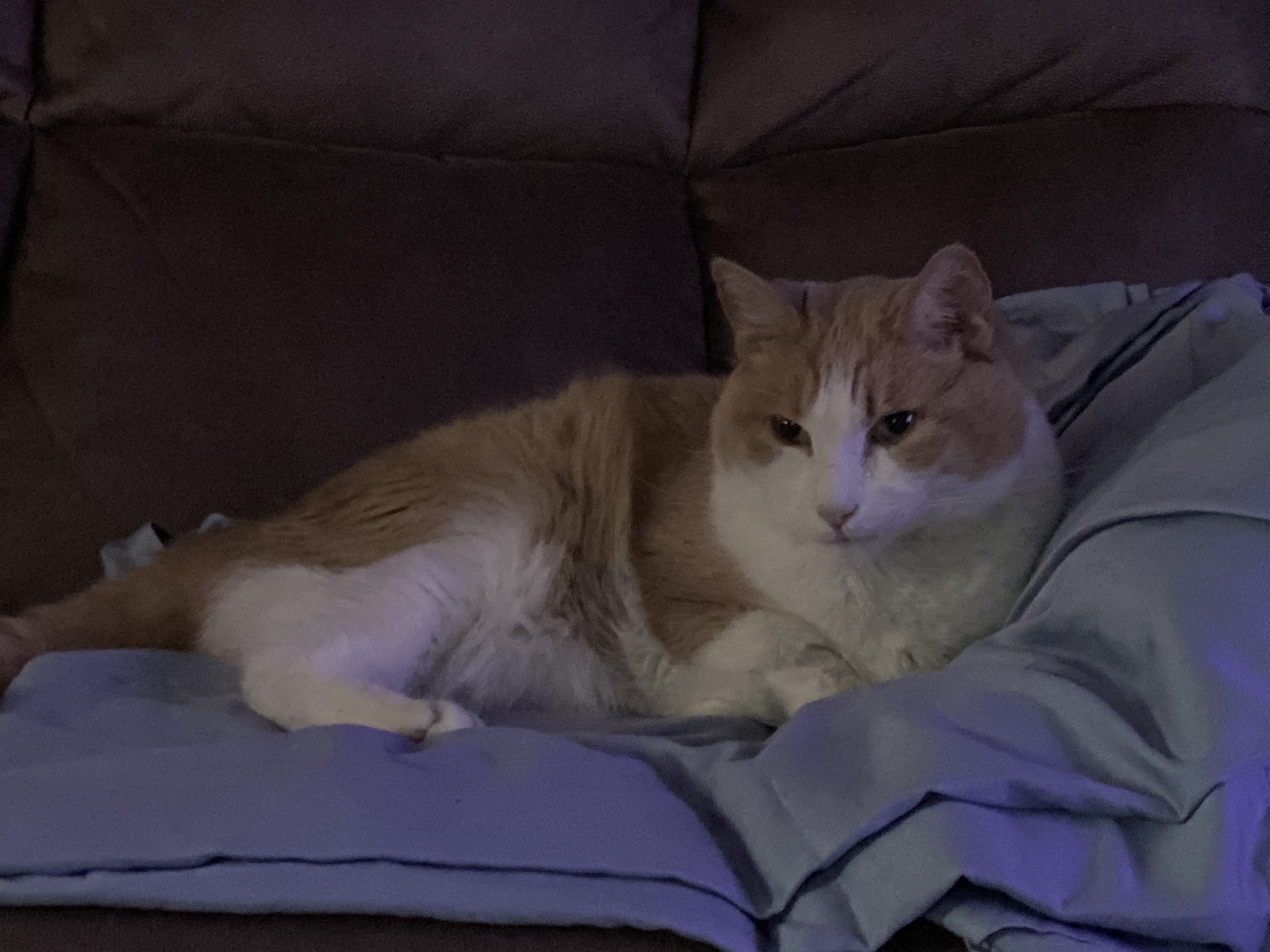 We are trying to give him room to sleep where his little body can either heal or decide it is enough.

So I guess our update is there really is no update… Just continued prayers for the best outcome for our Bunnyman.

Give all your furbabies extra hugs and scritches on behalf of our brave boy.

The last you heard from me was Rusty had just come out of the closet in the bedroom and was laying on the couch.  He decided it was great place to hang out and chill for the rest of the night.  He stayed there overnight too and is still there.

My daily prayer:
Dear God,
I know you are a bit busy right now. With the help of all of your angels and saints, both in heaven and on this earth, please help my little boy be as healthy and happy as he can be. While I would love for that be here with us, if the only way is to move on, let him go peacefully and quickly. Help us understand what is going on and give us the strength to pull through whatever the outcome is. Our lives and his life is in your hands.  If his life is supposed to continue here with us, give him the strength to fight. If his life is supposed to move on, give him permission to let go knowing he loved.

The answers that come are not always what I expect but are needed.

In desperation to find new ways of pilling Rusty, I was watching video after video and came across Transdermal Gel.  Never heard of it before!  A bit more research showed the Lasix can be compounded into that form.  I called the vet’s office to ask about that as well as Rusty’s general state.  His vet (The Saint Doctor Scott Withman) is off until Wednesday but they had the ER doctors call me back.

Nick and I decided we did all we could for the day and to be the pawrents we could, we needed to sleep. Nick slept on the other couch in the living room so Rusty would see him when he wakes up and so Nick could check on him and his breathing. I slept in the bedroom.  We have his spot set up in there on the bed if he chooses to come in there. That’s also the room with the closet that he hangs out in so either way he will know that I exist and if anything happens while he is there, hopefully I would know.  Before we went to sleep, I tried to give him some wet food and he ate some, not a lot, but he didn’t back away from it!

We set up a leaving serving tray with water, wet food, and treats and went to sleep.  We slept through the night, all of us. 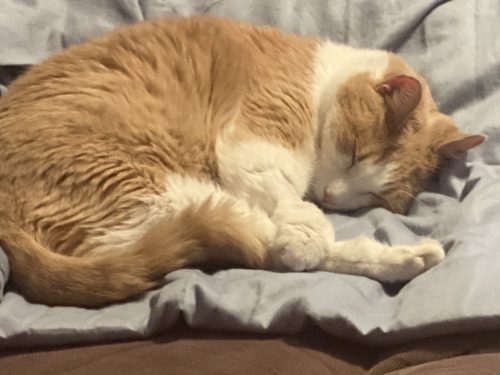 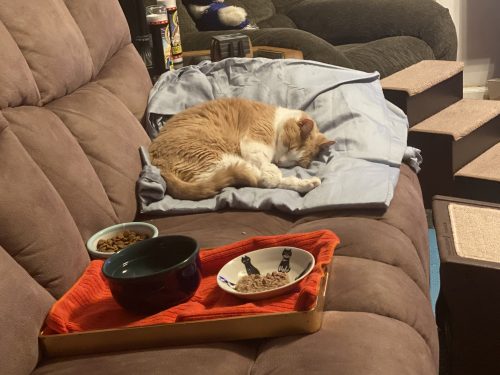 Rusty is still going.  He is breathing OK (not perfect as it there are issues with his lungs).  He ate more food this morning.  He drank water.  And still hanging out on the couch. 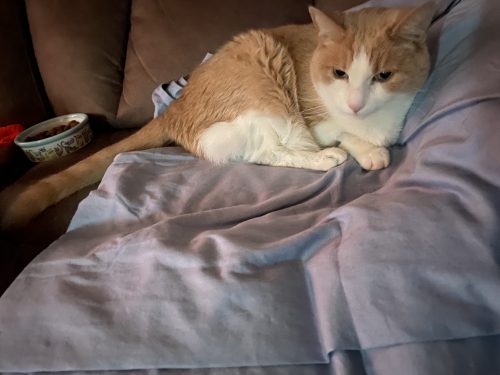 Still no litter box but no accidents either.  Eventually his body will catch up, or let go.

Well, I have to get to work.  Luckily we are both working from home so we can keep an eye on him.  I will try to keep our tripawd family updated.  We are literally on death/recovery watch.  It can go either way.

Rusty’s Obedient Hoomin Servants for as long as we can be,

About Your Tripawds Blog:

New Tripawds Bloggers: Please review your default first blog post at left for lots of helpful links for getting started with your blog or review the Help Videos in your dashboard. Edit these widgets from your Appearance settings to remove this notice, upload a custom header photo, or choose from 130+ themes, and much more!

Rusty the Bunnyman is brought to you by Tripawds.
HOME » NEWS » BLOGS » FORUMS » CHAT » YOUR PRIVACY » RANDOM BLOG